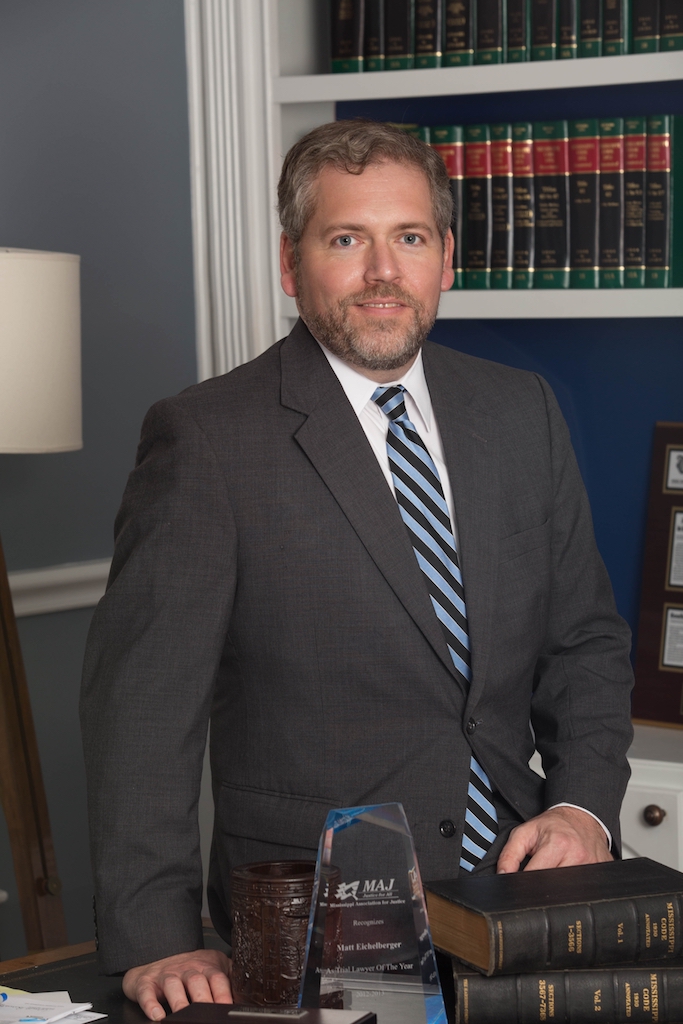 Over the course of his career, thousands of individuals, including judges, prosecutors, doctors, business owners, and elected officials, have turned to J. Matthew Eichelberger for legal help in their time of need. There’s a reason for that. In addition to being recognized as Trial Lawyer of the Year, Matt maintains an AV Preeminent® Rating from Martindale-Hubbell®, a perfect 10.0 Avvo Rating, and has been recognized as Super Lawyers® Mid-South Rising Stars.

Matt began practicing law in 2003 with the Jackson law firm of Sanford & Harper, where he worked for now-U.S. Congressman Gregg Harper. Seeking to get as much trial experience as possible, Matt became the Assistant Public Defender for Washington County, Mississippi in 2004. While there, he tried 18 felony cases to a jury verdict, including trials for murder, manslaughter, rape, armed robbery, house burglary, auto theft, aggravated assault, shooting into an occupied dwelling, business burglary, and possession of controlled substance with the intent to distribute. Aside from representing people at trial, Matt also represented hundreds of Washington County residents on crimes ranging from capital murder to drug possession to embezzlement.

In 2005, Matt moved to Texas, where he practiced criminal defense, construction litigation, and oil and gas litigation. Soon after moving there, Matt joined the firm of Gibson, Hotchkiss, Roach & Davenport, one of the oldest law firms in Texas. While in Texas, Matt successfully recovered over one million dollars for his clients, and successfully defended clients on charges ranging from Class C misdemeanors to first-degree felonies. In once instance, Matt obtained a dismissal for a client who was facing two first-degree aggravated assault charges involving law enforcement officers. That client faced up to 198 years in prison had Matt not gotten the charges dismissed. Matt moved home to Mississippi from Texas in late 2007. He has been a member of the State Bar of Texas since 2005.

When Matt moved back home to Mississippi in 2007, he joined the Office of the Hinds County Public Defender. He immediately took on multiple high-profile cases, winning an acquittal in a capital murder trial, a dismissal in another murder case, and eventually the reversal of one of Mississippi’s most highly-publicized murder convictions in decades. Matt tried numerous cases while at the Hinds County Public Defender’s Office, ranging from capital murder to drug possession, and represented many other clients who received pre-trial disposition of their cases. After leaving the Hinds County Public Defender’s Office in 2010, Matt opened the law firm of Eichelberger & Lee with his longtime friend, P.J. Lee, where they focused on criminal defense, DUI defense, and civil rights. In addition to his other criminal defense work while at Eichelberger & Lee, Matt helped present a successful self-defense case in a Warren County murder trial, and won dismissals of felony child abuse indictments in Madison County. Matt also helped secure justice for a man illegally held in jail for 9 months without a court appearance. For his work, Matt was chosen as the Trial Lawyer of the Year for 2012-2013 by the Mississippi Association for Justice.

In 2012, Matt opened the Eichelberger Law Firm, where he continues to focus on criminal defense and civil rights throughout Mississippi and Texas. Over the course of his career, Matt has recovered millions of dollars for his clients and secured the freedom of many people accused of committing serious crimes.  He remains passionately interested in exposing forensic science fraud in our nation’s courtrooms and has taught continuing legal education classes on that topic, as well as other subjects such as cross-examination and voir dire.

Matt is married to Jennie Eichelberger, with whom he practices law.