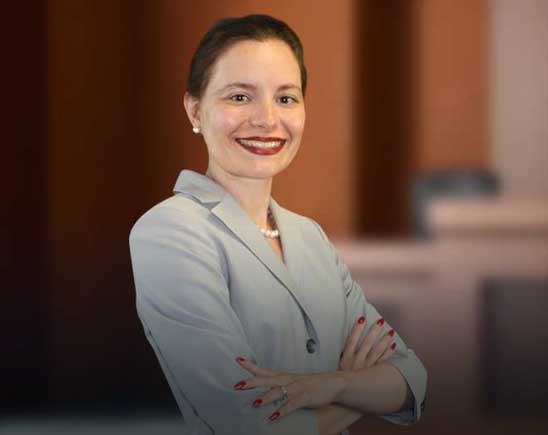 Ms. Del Percio is a member of both The Multi-Million and Million Dollar Advocates Forums, two of the most prestigious groups of trial attorneys in the United States. Membership is limited to attorneys who have won million and multi-million dollar verdicts, awards, and settlements. The organizations were founded in 1993 and there are approximately 4000 members located throughout the country. Fewer than 1% of U.S. lawyers are members.
Prior to joining Horn Law, Ms. Del Percio practiced as an insurance defense attorney representing large insurance companies in personal injury litigation. The broad scope of Ms. Del Percio’s experience gives her unique advantages in representing injury victims with significant injuries and physical disabilities.

Ms. Del Percio has appeared before numerous State and Federal courts, including the state trial courts in Missouri, Kansas, Colorado, Texas, Minnesota, and Arizona and the United States District Courts in Missouri, Kansas, Colorado, and Iowa. She is well-versed in all aspects of civil trial rules and procedures and recently successfully argued the Johnson v. McCullough case before the Missouri Supreme Court which dealt with jury selection.
Ms. Del Percio shares her knowledge by teaching seminars to attorneys, paralegals and insurance professionals on “Litigating Bad Faith Insurance Claims,” “Plantiff’s Litigating Distracted Driving Cases,” “Insurance Claims: Investigation and Adjuster Negotiations” and “Personal Injury From Start to Finish.”

Ms. Del Percio is a recipient of the Thomas E. Deacy, Sr. Memorial Trial Practice Award and has been named in America’s Registry of Outstanding Professionals, Strathmore’s Who’s Who, and is a member of the Order of Barristers. She was recently named one of the top 1% of personal injury attorneys in the nation by The National Association of Distinguished Counsel.

Ms. Del Percio’ s cases, settlements, and verdicts have been featured in Missouri Lawyers Weekly. She has helped Horn Law clients recover over $24 million in settlements, judgments, and appeals over the past five years.