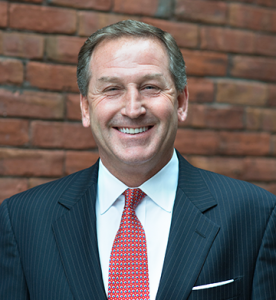 Michael T. van der Veen is the rare attorney who excels in both the plaintiffs’ civil litigation and criminal defense. He has established his reputation by winning multimillion-dollar jury verdicts in State and Federal Courts as well as winning major criminal trials from murder to embezzlement.

From an early age, Mr. van der Veen knew he wanted to be a trial lawyer. Always a serious student, he graduated from Choate Rosemary Hall in 1981 and earned a BA in political science from Ohio Wesleyan in 1985. He earned his first law degree, a J.D., from Quninnipiac School of Law in 1988. He was a 1992 graduate of the National Criminal Defense College, and after practicing private criminal defense in Chicago for six years, he moved to Philadelphia in 1994. He earned an LLM in Trial Advocacy with Highest Honors from Temple University School of Law in 1995, and for the past 20 years, has practiced law in Pennsylvania and New Jersey.

Attorney van der Veen concentrates his practice in personal injury, criminal defense and commercial litigation. He is driven to stand up for the injured and the innocent – a drive that has fueled his formidable reputation, as well as his extraordinary results. Mr. van der Veen’s record of success in both civil and criminal courts includes acquittals in high-profile criminal cases and numerous seven-figure and eight-figure awards for victims. He has saved numerous corporations from unfair and oppressive government regulation. He has won out-right victories for small companies and their owners, who were embroiled in complex corporate litigation.

Mr. van der Veen has been named to the Pennsylvania Super Lawyers list for thirteen straight years, and is often seen on television and in print media.

When Mr. van der Veen represents injured clients, he is known for his compassion and his unwillingness to stop until his clients have received fair and complete justice. In one case, he won a $31.5 million dollar judgment for a client who was rendered paraplegic in a motor crash. In another case, he represented a child run over by a tractor-trailer. In representing that child and his family, attorney van der Veen had to fight immigration to bring the young boy’s father from Haiti to Philadelphia. He fought for and arranged for the boy to get the best medical care in the world. When the trucking company tried to blame the boy for his own injuries, Mr. van der Veen took the case to trial in front of a Philadelphia jury and after four days of trial, settled the boy’s case for $10 million.

In Federal Court in Scranton, attorney van der Veen won a $4.25 million dollar jury verdict for a man rendered tetraplegic in a crash with a tractor-trailer. After the verdict, the man and his family were able to build an appropriate handicapped-accessible home.

In front of a jury in Chester County, attorney van der Veen won a $3.25 million dollar verdict for a nurse who suffered a mild traumatic brain Injury when a dump truck crashed into her.

A suit was brought in Federal Court in Wilmington, Delaware to fight for and recover $1.4 million dollars for the widow of a pharmaceutical executive killed in a high-speed motorcycle crash.

Attorney van der Veen collected a $1.375 million dollar settlement for a 24-year-old man, who was the passenger in a car hit by a Septa bus on the Blue Route in Delaware County and sustained a head injury.

Mr. van der Veen won a $1.25 million dollar settlement for a young prizefighter hit by a drunk driver in a DRAM shop case against an after hours bar that got the defendant drunk.

Mr. van der Veen has also won large, confidential settlements for clients who have been injured in construction accidents.

Beyond representing catastrophically injured people, attorney van der Veen fights for the innocent. As a young lawyer in Chicago, he represented John Parker and The National AIDS Brigade in their fight to legalize the use of clean hypodermic needles in the State of Illinois to combat the spread of the virus. What came to be known as “The Chicago Needle Trials”, attorney van der Veen successfully used the rare defense of necessity to win and help change the law in Illinois. The trials garnered national media attention and set the tone for Mr. van der Veen’s no-holds-barred style of defense.

In addition, attorney van der Veen has won numerous DUI trials. He has successfully represented people charged with vehicular homicide. He won a trial in Philadelphia to prove the innocence of a young St. Joseph’s University student falsely accused of rape after the young man was lambasted in the newspapers. He has won freedom for white collar executives wrongly accused of corporate embezzlement. He has successfully represented individuals under investigation for RICO crimes. He won jury trials for people falsely accused of felony aggravated assault of police officers where, in fact, his clients were really the victims of police brutality. Recently, Mr. van der Veen won a total acquittal at trial for a South Philly man charged in the murder of his own mother.

In the past decade, Mr. van der Veen has been increasingly asked by clients to represent their business interests. Commercial litigation was a natural progression for Mr. van der Veen and his tireless work ethic. His exhaustive preparation proved to be a winning formula for his corporate clients. He has won corporate cases where clients were sued for fraud and corporate theft. He has recovered millions in lost revenue and profits for local companies and their owners. Usually representing small businesses, attorney van der Veen has developed a cost-effective approach to litigation by identifying the goals and objectives of the litigation at the onset.

Mr. van der Veen is actively involved in the community, and accepts as his personal responsibility, the duty to support and contribute to the community. As a young lawyer, he devoted much time and resources to charitable causes. Throughout the years, he has chaired many charity events from basketball and golf tournaments to formal black tie fundraisers. He has mentored and coached children and sat as Chairman of the Board of Directors of the Philadelphia chapter of the American Diabetes Association. Mr. van der Veen was active on the local YMCA Board and sat on the Board of Trustees of the Montgomery School. He is currently serving a one-year term on the Board of Directors of the Philadelphia Trial Lawyers Association. He also serves on the Board of Directors of the Washington Square West Civic Association. Mr. van der Veen is married and has two wonderful daughters.