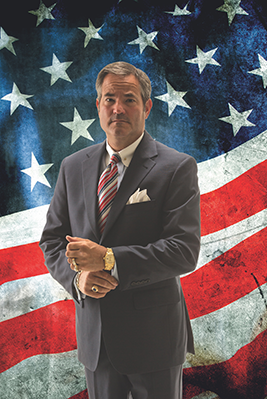 T. Scott Jones is a fierce trial lawyer and a zealous advocate for his clients.

T. Scott Jones was born and raised in Knoxville, Tennessee. Graduating from Farragut High School in 1984, T. Scott attended and graduated from Oxford College in 1986, and then Emory University in 1988, all while working as well as maintaining a full social calendar with the Beta Theta Pi Fraternity. After graduation, T. Scott headed home to Knoxville to attend the University of Tennessee College of Law, becoming a member of The International Legal Honor Society of Phi Delta Phi, and graduating early in two and a half years in 1990.

T. Scott gives back to his community through numerous pro bono cases each year, and works extensively with the Kerbela Shriners of Knoxville. He is on the Advisory Board of the University of Tennessee College of Law Institute for Professional Leadership, has received the Melvin Jones Fellowship Award from Lions Club International, and is also an active member of these fraternal organizations:

Well-regarded in his hometown of Knoxville, Tennessee, T. Scott has received numerous accolades and awards. Multiple times, his peers in the legal field have voted him one of Knoxville’s Top Attorneys in polls conducted by CityView magazine. The American Institute of Criminal Attorneys named him one of Tennessee’s 10 Best Attorneys, and the American Society of Legal Advocates named him one of Tennessee’s Top 100 Litigation Lawyers. He has also been nationally recognized as one of the Top 100 Trial Lawyers in America by the National Trial Lawyers. T. Scott’s successful litigations for his clients have also qualified him for the prestigious Million Dollar Advocates Forum and the Multi-Million Dollar Advocates Forum.

T. Scott knows the importance of interacting with colleagues to stay abreast of developments and changes in the legal world. T. Scott frequently teaches CLE courses on trial strategy, teaching other lawyers his methods for success in the courtroom, and is certified as a Rule 31 Mediator in the Tennessee Supreme Court. He is a member of the Knoxville Bar Association, the Tennessee Bar Association, the National Trial Lawyers, and both the Tennessee and American Associations for Justice. In addition, T. Scott is licensed to practice in all three United States District Courts for the state of Tennessee, the United States Court of Appeals for the Sixth Circuit, and the United States Supreme Court.

Other organizations T. Scott is a member of:

American Board of Trial Advocates

Outside of the courtroom, you can often find T. Scott on the weekends attending services at Concord United Methodist Church or hunting (he is a Life Member of the National Rifle Association).

T. Scott is a skydiver, scuba diver, and motorcycle racer, piloting high-performance motorcycles at speeds up to 200 miles per hour. T. Scott holds verified records from the following tracks:

T. Scott is also a Jack Daniel’s Tennessee Squire and a Kentucky Colonel. He also enjoys traveling throughout the world with Victoria, his wife of 29 years, and their two children, Abby (daughter, 21) and Spenser (son, 17).