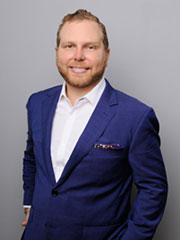 Just five days after passing the Florida bar, Wes Farrell set out to build a law firm that could make a real difference in the world and bring justice to those in need of a strong and passionate advocate. Starting the firm from humble beginnings out of his mother’s guest house, Wes tirelessly worked to bring justice to those in need in cases ranging from immigration, human rights, criminal defense and civil litigation.

Over the next few years after joining forces with his best friend from law school, Ricky Patel, the two were able to build the firm from just a handful of clients to one of the fastest growing law firms in America. Within only a few years of starting the firm., Wes found himself as lead trial counsel for over 3,000 clients seeking over a billion dollars in damages resulting from the BP Oil Spill litigation, one of the largest environmental disasters in the history of the United States.

The success enjoyed from BP has further led to Wes working with clients against some of the largest corporations in the world and achieving tremendous results. His expertise and ability to get results in the most complex of cases has proven invaluable to his clients. In addition to working on national class action cases, Wes has devoted a substantial amount of his time to representing a large and diverse group of former NFL players in the NFL concussion litigation.

Additionally, Wes works closely with his partners and attorneys nationally to assist in representing clients in large commercial and municipal insurance disputes. Because of the difference he’s made in the lives of his clients, Wes was recognized as one of the top 100 trial attorneys in America by the National Trial Lawyers Association. He is a member of both the Million Dollar Advocates Forum and Multi-Million Dollar Advocates Forum, a distinction held by less than 1 % of practicing attorneys in America Only attorneys who have recovered verdicts and settlements worth more than a million dollars can claim membership.

He was further recognized by the National Trial Lawyers association as being one of the top “40 under 40” attorneys in America. Wes has also been recognized since 2015 as one of the Premier 100 civil trial attorneys in the country by the National Academy of Jurisprudence. Mr. Farrell and Mr. Patel have previously been recognized by Inc. Magazine as running one the 5,000 fastest growing private businesses in the United States. Today, Wes continues to bring his valuable knowledge and experience in class actions and complex litigation to clients throughout the country.

Wes is a goal-driven attorney who prides himself on running a professional, accomplished firm that examines every case from all angles and not resting until his clients receive justice.